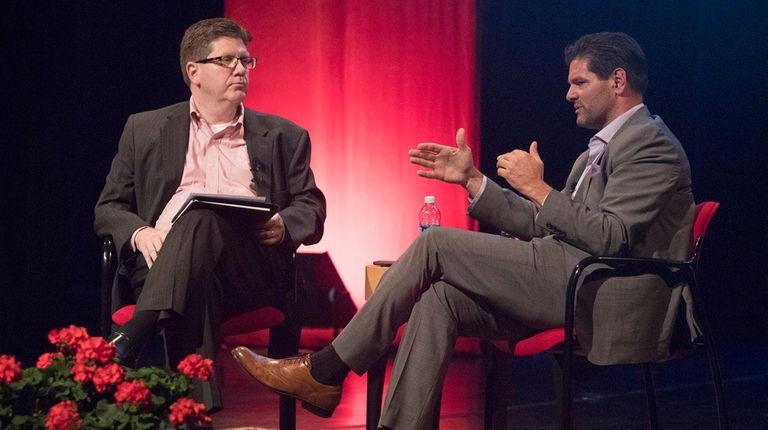 Speaking Tuesday night at the Entrepreneurs Edge series staged by the College of Business, Alletto said work consumes his time and there’s no way to separate it from the rest of his life.

Sprinkling anecdotes with salty language, Alletto spoke before an audience of Stony Brook students and members of the College of Business CEO leadership council at the Charles B. Wang Center. He was interviewed on stage by Joseph Campolo, advisory board chairman of Protegrity Advisors, a merger and acquisition consultancy in Ronkonkoma, and managing partner of Ronkonkoma-based law firm Campolo, Middleton & McCormick.

In his role as the company’s CEO and self-described “quarterback,” Alletto said he is the “big visionary,” and that he has made an effort to hire people who can compensate for his own shortcomings.

“I’m probably the worst manager of people,” he said. “I can’t manage myself.”

At the same time, Alletto said he steadfastly refuses to hire middle managers, preferring to describe the company’s broad direction and let employees figure out how to get there.

“You want to know how to compete on Long Island?” he asked. “You’ve got to get rid of this middle management.”

He acknowledged that his “guardrail” management approach lets the company “veer a little bit left and right.”

Bedgear has grown from 63 employees in 2013 to almost 200. The company has staged promotions and forged marketing partnerships with sports teams, including the New York Mets, the Boston Red Sox, the San Diego Padres, the Denver Broncos, the New York Islanders and the Dallas Mavericks. Bedgear was the “official mattress and performance sleep partner” of the 2017 TCS New York City Marathon staged earlier this month.

The company set up pillows, bedding and mattresses at the Wang Center for attendees to try.

Alletto addressed the students in the audience, urging them to seize opportunities when they arise and push through obstacles like people who camp outside of Apple stores to get the latest iPhone.

“That’s what the world is today. . . . You’ve got to do [expletive] that somebody else won’t . . . The single most important lesson in life is: Never give up. When you give up, I’m going to take your [expletive].”